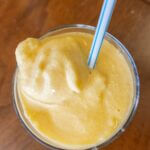 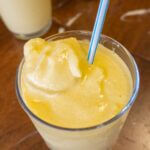 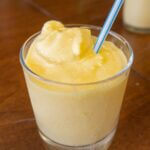 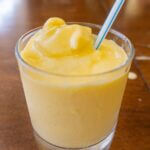 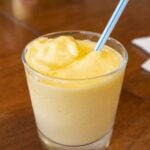 Want to know how you can make your own version of Orange Julius in less than 5 minutes? This easy copycat recipe will have anyone addicted. With only a few simple ingredients, it's not surprising that this refreshing drink tastes just like the original! The tangy taste is perfect for those hot summer days when all we want are some cold refreshments on hand or during a nice leisurely breakfast any time of the year!

Growing up, one of my favorite summertime treats was a good ol' Orange Julius. Sipping on an orange Julius really brings back happy memories of summertime as a kid. I remember when my dad would take me to an Orange Julius stand to get one of these for me on our Daddy/daughter dates to the movies.  🙂

If you haven't had an Orange Julius before I would describe the flavor to be much like a creamsicle but in smoothie form. It's so simple to make this deliciously frothy orange drink!  Basically, all you have to do is blend up a combination of frozen orange juice concentrate, some milk, ice, vanilla and a bit of powdered sugar.

These make for such a refreshing treat on a hot summer day or really any time of the year!

I hope you enjoy this recipe! ❤️ If you give it a try, please let me know how it turned out for you in the comments section at the bottom of the page or share a pic of your om noms on Instagram and tag @dishesanddustbunnies! ❤️

What is an Orange Julius?

An Orange Julius is a sweet and tangy concoction of orange juice, milk, sugar, vanilla, and ice blended together to make a thick foamy smoothie. The orange Julius was originally invented by a man named Julius Freed in the late 1920's.

Julius Freed was a struggling health food salesman who wanted to find a way for people to get the nutrition from orange juice without drinking it straight from the fruit. In his quest to develop a new food, he stumbled across a method of turning orange juice into a smooth, frothy beverage by adding ice, sugar, protein powder and raw eggs. His wife dubbed the drink an Orange Julius. Julius eventually opened up his own orange juice stand specializing in selling his special drink.

Julius sold the business in the early 1960s, and it was eventually bought by Dairy Queen, which helped to distribute it to a larger customer base. Eventually, orange Julius became a super popular drink found in malls all across the United States and Canada.

In today's post, you'll learn how to make the popular drink right at home using just a few simple ingredients! This is truly one of the best orange julius recipes out there!

Ingredients – What is it made of?

This version of the famous Orange Julius is made by blending a can of concentrated orange juice, milk and ice, along with powdered/confectioners sugar, vanilla, a little water and some meringue powder (optional).

The original version of the Orange Julius invented by Julius Freed contained raw egg whites to make the drink frothy, but due to changes in food safety regulations, this was replaced with a frozen banana.

As an optional addition to the recipe instead of using raw eggs, you can add 1 tbsp of meringue powder (also known as egg white powder) to your Orange Julius to get the most authentic version of the drink. Meringue powder is safe to use and creates a very close flavour to the original drink.

Making homemade Orange Julius is super simple! All you have to do is combine concentrated orange juice, ice cubes, milk, powdered sugar, vanilla extract with a little water and some meringue powder (optional) in a blender until smooth. Serve immediately.

Using Fresh Orange Juice instead of Concentrate: You can use freshly squeezed orange juice instead of the concentrated kind for this recipe, however, please keep in mind that it will have a more watery texture. If you choose to use fresh orange juice, I'd highly recommend freezing the juice in an ice cube tray. By using frozen juice, you'll get a much better texture that's closest to a real Orange Julius.

Add other kinds of Fruit: Fresh or frozen strawberries are a popular addition to the drink, but you could also try adding other fruit such as pineapple, bananas, peaches or mangoes.

Texture: To adjust the texture of the drink to your liking, you can try adding more or less ice, etc. It's really up to you! For a creamier version of the drink, add a little more milk and omit the water.

Meringue Powder: The original recipe for Orange Julius contained raw eggs in order to add protein and a nice frothiness to the drink. Over time raw egg was no longer used in the recipe due to safety regulations, and they added banana instead. To get the frothiness and flavour of the original drink, I highly recommend adding a little meringue powder along with the other drinks!

How to Store Leftovers

Classic Orange Julius is best when it's fresh and I honestly never have any leftovers to store of the yummy drink!

If you do have a dome of the drink leftover, it's fine to store in the fridge for a day but keep in mind that it will be more watery as the ice and concentrate will have melted. It'll still taste delicious but the texture will be different.

If you'd like, you can also try freezing any leftover Orange Julius! Pour any leftovers in a popsicle mould, freeze and you'll have an amazing creamsicle treat!