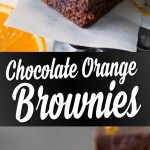 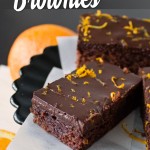 There's nothing quite like a dense, fudgy brownie. And when you add in the rich flavor of dark chocolate and the zesty tang of orange, you've got a real winner on your hands! These Decadent Dark Chocolate Orange Brownies are the perfect treat for any chocolate lover. These delicious rich, moist and cakey Chocolate Orange brownies make for a perfect dessert for Christmas, Thanksgiving and the holidays!

These brownies are a decadent treat that will tantalize your taste buds. The orange and chocolate flavors combine to create a delicious flavor profile that is sure to please. These brownies are perfect for special occasions or when you just need a little something sweet.

These Decadent Dark Chocolate Orange Brownies are the perfect way to show your dark chocolate lover how much you care! Made with rich, dark chocolate and fresh oranges, these brownies are sure to please. And they're so easy to make, anyone can do it!

I hope you enjoy this recipe! ❤️ If you give it a try, please let me know how it turned out for you in the comments section at the bottom of the page or share a pic of your om noms on Instagram and tag @dishesanddustbunnies! ❤️

It's been a while since I've shared with you a recipe that's super duper chocolately so I thought, why not make something as decadent as possible?

My goodness – I ‘m so thrilled to bring you this decadent dessert recipe! These brownies are sooo good that you'll be making them for years to come.

Yup, these Chocolate Orange Brownies are just about as decadently sinful and yummy as you can get – no kidding here – these may even become legendary. 😉

Chocolate orange lovers – this is for you! Ok, just look at all that chocolately goodness… Completely drool worthy, am I right?

I'm happy to say I'm quite proud of how the pictures for this post have turned out since I've been practicing quite a bit with my photography, let me tell you…. these brownies are even more delicious than what the pictures show.

Seriously, get your shopping list ready and make these pieces of heaven pronto!

These delicious rich, moist and cakey brownies make for a perfect dessert to bring to holiday and Christmas parties. You can either cut them into 15 BIG squares or cut them into 30 “two bite” sized rectangles – it's up to you.

The batter for these tasty things is infused with fresh squeezed orange juice as well as some orange extract to create the perfect level of “oranginess”. Chocolate and orange make for an amazing flavor combination!

Orange goes just perfectly with a the rich dark chocolate that's used in the recipe…. mmmmmmmm….

The tops are covered in a Dark Chocolate Ganache and sprinkled with some fresh orange zest.

One of the things I've learned from cooking and baking over the years is that we eat with ALL of our senses.  Adding the orange zest to the tops of the brownies is not only attractive visually, but the scent of the citrus pushes the whole experience of biting into these to the next level.

I really enjoyed playing around in the kitchen to make this recipe for you guys! Taste testing this was even better! ;D

What makes this the best Chocolate Orange Brownies Recipe?

The orange zest in these brownies give them a delicious flavor that compliments the chocolate perfectly.

These brownies are made with dark chocolate, which gives them a rich flavor that is not too sweet. The orange zest helps to balance out the sweetness and give these brownies a unique flavor that you will love!

One bite of this chocolate orange brownie and you'll know why they're THE BEST!

What Ingredients are used to make Chocolate Orange Brownies?

The Chocolate ganache topping is made from dark chocolate, heavy cream, a little salt, orange extract ad the zest of a whole orange.

You can find the full recipe details, including ingredient amounts and the full instructions in the recipe card at the bottom of this post, but first, here's a quick overview of how to make homemade chocolate orange brownies!

Begin by preheating your oven to 350°F. Line a 9″x13″ metal baking pan with parchment paper and grease with butter and set aside.

Using an electric mixer or stand mixer, cream together the butter with the sugar. Next, add the eggs, one at a time, beating for about 5 minutes until everything is well combined. To this mixture, add the orange juice, orange extract, and vanilla. Mix it in for a minute or so.

In a separate medium mixing bowl, combine the cocoa, flour, baking powder, and the finely grated chocolate. Use a whisk to make sure it’s combined well.

Next, while mixing on low, add about 1/2 a cup of the combined dry ingredients at a time. Continue mixing until everything is well combined.

Scrape the batter into the baking pan and spread it out so it’s even, then bake in the oven for about 24 minutes. A toothpick should come out clean when it’s ready. Don’t over bake these – you want them to be moist!

Allow the brownies to cool completely to room temperature, while still in the pan. Once the brownies have cooled, pour the warm Chocolate Ganache topping over top. Sprinkle the orange zest on top while the ganache is still warm.

Put the pan of brownies in the fridge to chill for at 20 minutes or so to allow the topping to set. Once the topping has set, CAREFULLY lift the brownies up and out of the pan by holding the edges of the overhanging parchment paper. Cut the brownies into 15 large squares or 30 small rectangles. Serve!

To Make the Chocolate Ganache Topping:

In a small sauce pot, heat the heavy cream until it’s near boiling. Turn off the burner and remove from the stove.

Slowly pour the heavy cream into the bowl with dark chocolate. Sprinkle a pinch of salt and add the orange extract. Using a whisk, combine the chocolate with the heavy cream.

Allow the mixture to cool for about 5 minutes. Stir again.

Now you can pour it over the brownies as described above! Don’t forget to sprinkle the top with the orange zest. 😀

Can I make Chocolate Orange Brownies ahead of time?

Yes, you can make Chocolate Orange Brownies ahead of time by baking them and then cooling them completely.

If you have any leftover chocolate orange brownies, it is best to store them in an airtight container in the fridge or freezer.

Chocolate orange brownies will be good for up to a week in the fridge or for up to 3 months in the freezer.

Can I freeze Chocolate Orange Brownies?

Yes, chocolate orange brownies freeze very well! They will be good for up to 3 months in the freezer.

What to Serve with Chocolate Orange Brownies

When it comes to desserts, brownies are always a fan favorite. These Decadent Dark Chocolate Orange Brownies are no exception! Served with a glass of milk or some coffee, these brownies will be sure to satisfy any sweet tooth.

For even more orange flavor, these are lovely served with orange slices on the side!

To Make the Chocolate Ganache Topping: