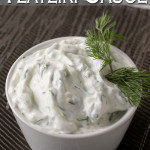 If you're a fan of Greek food you will likely be familiar with the tangy Tzatziki sauce that's commonly served with slices of pita bread as a dip or as a sauce in gyros.

Since Greek yogurt has become very common in grocery stores in the past few years, it's never been easier to make your own Tzatziki at home!

I love traditional dips made with sour cream and all those other sinful ingredients, but tzatziki has always been my favorite!  I love how satisfying tzatziki sauce is with its flavorful combination of garlic, lemon and dill.

I honestly can never get enough dill – I love the stuff!

The scent of dill really brings back happy memories of when I was a little girl growing up on my grandparents farm.  My grandmother always had fresh dill weed growing in her garden so she could use it for her pickling. 🙂

One of the most important things to keep in mind when making tzatziki sauce is the moisture content of the cucumber used in the recipe.

Too much moisture from the cucumber will make your sauce way too watery and you certainly don't want that.

Cut the cucumber in half lengthwise, then using a spoon scoop out the seeds in the middle. I like to leave the skin on my cucumbers so I rarely peel them – it's up to you though – you can peel it if you like.

After this, grate the cucumber finely and coarsely and place it into a metal strainer over a bowl.  Sprinkle the cucumber with a little salt and give them a squeeze with your hand to remove some of the moisture.

Give the cucumber pieces about 25-30 minutes to drain any more of the excess moisture.

You might be surprized with how much liquid you can get out of one cucumber!

Draining the excess moisture from the cucumber

Give them another squeeze and then all you have to do is combine with the rest of the ingredients in the recipe!

In addition to using tzatziki as a dip, it works very well used in sandwiches or wraps!