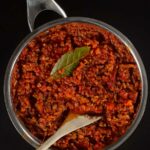 I’ve been trying to teach my two-year-old son (update: he's now 6!!?) how to pronounce Bolognese and the sweet little fella is doing his best. He calls Bolognese sauce:

Bolognese is a traditional Italian meat sauce commonly served with spaghetti. There are many different versions of spaghetti Bolognese and the ingredients used tend to vary from cook to cook.

My version of Bolognese sauce uses a combination of ground beef and ground pork, various spices, some garlic, onions, celery and carrots simmered in diced and crushed tomatoes. I use canned tomatoes not fresh tomatoes as it is more convenient for this recipe.

This recipe is wonderfully savory and the combinations of spices work very well together. It’s not spicy and the flavors are not overpowering at all, but still very flavorful so it’s a great dish for kids.

My son Donnie, LOVES this sauce and will eat it right up.

You can use any kind of pasta you prefer with this dish, but we like to use a plain old spaghetti ❤️

This recipe should be enough to make at least 8 servings, but I like to make extra so I can freeze some and have it on hand for a quick dinner!

What is Bolognese Sauce made of?

Bolognese sauce is a thick sauce that is traditionally made with a mixture of ground beef, ground pork, canned tomatoes, tomato paste and crushed tomatoes (or substitute with tomato puree) as the primary ingredients. The beef and pork are cooked together until they are very tender, and then the tomatoes are added to the meat mixture. Additional flavorings come from chopped vegetables, bay leaf, celery and carrot, finely chopped onions and garlic. Beef bouillon powder is used to enhance the beef flavors (you can replace beef bouillon with beef stock), and balsamic vinegar and milk are used in small amounts. I use thyme, oregano, salt, pepper, brown sugar and sage flakes as seasonings.

This meat sauce / tomato sauce is then served with a pasta of your choice!

What is the best pasta to serve with Bolognese sauce?

Most pastas will do a good job (fettucine, pappardelle and penne are all solid choices and spaghetti is a popular one) but to Italians, authentic Bolognese sauce is served with tagliatelle. Tagliatelle is a type of pasta that is long and flat, and the flatness lets it soak up the sauce and scoop up the meat better than a thinner noodle like spaghetti would. Tagliatelle is traditionally made with egg, but you can also find recipes that are made without egg.

What kind of meat is best for Bolognese?

A mix of beef and pork is the meat combination used in traditional Bolognese recipes. It is possible to use beef alone, a mixture of ground beef and ground veal, or pork or lamb alone as they tend to hold more flavor and are moister than beef.

My personal recommendation is to combine beef and pork in the same measurements. The beef makes it taste just like traditional Bolognese while adding pork will prevent the beef from becoming too dry, as pork is more moist than beef. Using a mixture of ground beef and ground veal is also quite nice, as the veal gives flavor variety and greater moistness to the beef.

What is the difference between Bolognese sauce and spaghetti sauce?

The history of these two sauces also differs. Bolognese sauce originated in Italy, while spaghetti sauce was created in the United States.

Why is it called Bolognese Sauce?

It's a case of something being lost in translation. Bolognese sauce is eaten throughout Italy but it never has been called that in Italy, where it is merely known as a variation of ragu. During World War 2, American and British soldiers were stationed in the town of Bologna where they ate the ragu there and were very fond of the taste. When they got home they knew they had to recreate such a great recipe themselves except using spaghetti noodles as those were more common in America.

Even though Bologna is not the birthplace of Bolognese sauce, those soldiers came to associate the sauce with the town of Bologna (where they ate it) and once they returned home they would always refer to the ragu they ate in Italy as Bolognese sauce and the name stuck as meaty pasta sauces became popular in the United States and England.

How do you make a Bolognese tastier or more flavorful?

What to Serve with Bolognese Sauce

What are some Alternative Cooking Methods for cooking Bolognese sauce such as a slow cooker, instant pot, etc

–How to cook Bolognese sauce in a slow cooker / crock pot

Place the beef, pork, and veal into a slow cooker.

In a bowl, mix together the tomatoes, tomato paste, wine, garlic, onion powder, salt, and pepper. Pour this mixture over the beef mixture.

-How to cook Bolognese sauce in an instant pot

Pour the olive oil into the Instant Pot and set it to “sauté.”

Add the ground beef, pork, and veal to the Instant Pot and cook until browned.

Close the lid of the Instant Pot and set it to “pressure cooker.” Cook for 35 minutes.

Release the pressure of the Instant Pot and serve.

Can I make Bolognese Sauce ahead of time?

Absolutely! In fact, Bolognese sauce tastes even better when it's had a chance to sit and meld all of the flavors together. If you're making Bolognese sauce ahead of time, simply cook the sauce until it's finished, then let it cool slightly. Transfer the sauce to an airtight container and store it in the fridge.

How to Store and Reheat Leftover Bolognese Sauce.

How long is Bolognese Sauce good for? in the fridge, freezer, etc.

One option is to simply freeze the sauce in an airtight container. When you're ready to eat it again, thaw it overnight in the fridge and then reheat it on the stove over low heat. This method is great if you want to portion out the sauce and have it ready to go for quick and easy meals later on. You can also freeze Bolognese sauce for up to 3 months.

To reheat, simply thaw overnight in the fridge and then heat on the stove over low heat until warmed through.

Another option is to refrigerate the sauce in an airtight container for up to four days. Wrap it tightly or store it in an airtight container to prevent it from drying out. Reheat it on the stovetop over low heat, stirring occasionally, until it's warmed through. You may need to add a splash of water or beef broth to thin out the sauce if it's too thick. Give it a taste and adjust the seasoning.