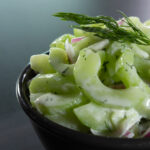 This is a recipe you might want to double – it's soooo good! 😀

For this recipe, I created a delicious and zesty homemade dressing using a combination of yogurt, vinegar and dill with a little sour cream, salt and a sprinkle of sugar.

This recipe is so simple and easy to put together. It's just a matter of chopping your cucumbers (make sure the seeds are removed) and tossing it all together with the rest of the ingredients.

After everything is combined and has chilled for about 30 minutes in the fridge the flavours will mingle together and make something spectacular!

If you feel like getting creative and adding some other veggies to this, please do!