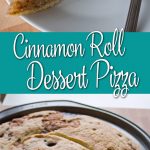 I think the world needs more of them, don't you?

We are not only a cinnamon roll obsessed family, we are also pizza obsessed (surprize surprize! lol).

With that in mind, there's no way I could resist putting the two things together to great one crazy yummy Cinnamon Roll Dessert Pizza!

To start this recipe, I began by creating the dough and rolling it out into a nice big rectangle.

Then, I spread an oh so irresistible  combination of cinnamon, brown sugar and butter on top.

Next I rolled up the dough so it looked sort of like a snail shell and placed it on my pizza pan to bake.

Just look at that!!

Can you almost smell that cinnamon goodness?!?

Let me tell you… this thing baking in the oven made the house smell like a dream… a very yummy one.

Next, I spread some of my homemade cream cheese icing on top and cut it into 8 slices.

As you may know – we're also cream cheese obsessed! 😀

If you'd like, you could also try slicing the dessert pizza and then providing the cinnamon roll icing on the side for dipping!

Taking a bite out of this dessert pizza is pure heaven.

It really is everything. 😉