My son loves to watch all kinds of shows on tv as well as online, but honestly I've become frustrated with how many of the shows these days are lacking an educational component. Just like any little kid his age, he can become obsessed with watching the same shows over and over again.

In my search for something fun and different for my son Donnie to watch, I've come across a wonderful and educational show called “The Adventures of Napkin Man” on Kids CBC. If you're not familiar with the show, you're missing out! 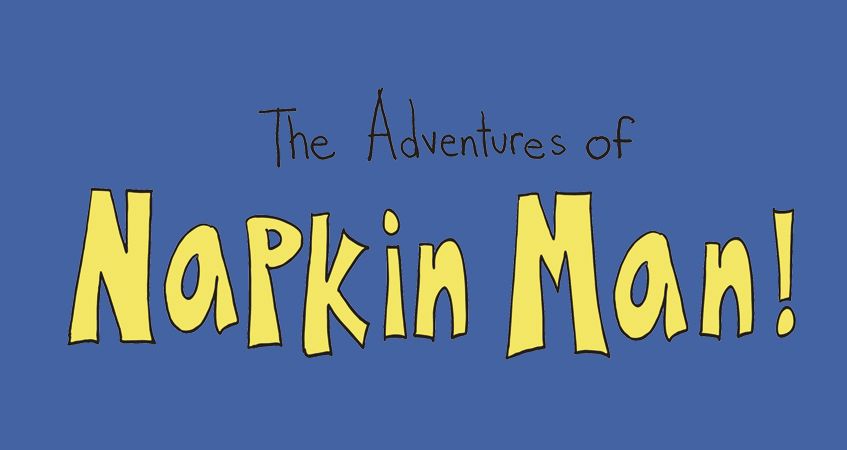 What is The Adventures of Napkin Man?

The Adventures of Napkin Man is a beautifully animated educational children's program from Kids CBC that also includes live action. In the episodes, an awesome pre-school teacher (played by Yannick Bisson of Murdoch Mysteries) tells stories by drawing and bringing to life a character called Napkin Man.

Each of the episodes are designed to help kids identify and manage their feelings – the animated character Napkin Man illustrates the theme of the episode in a fun and imaginative way that my son just loves!

Kids CBC has also created 4 enhanced interactive online episodes based on the shows from season 2 of the series. All four of the interactive episodes feature embedded activities and games which give kids the chance to directly engage with the main themes of the episode. For example, the show will pause at a pivotal point and present a fun game thematically related to the emotional dilemma featured.

My son, Donnie LOVES playing the games in the interactive episodes! He just couldn't get enough and was so excited each time a new game was presented to him.

One of the games includes Music Machine, where kids get to create music based on the emotion featured in this episode.

Donnie loved this one and just tapped away happily as he created. 🙂

Donnie's second favorite game was Color My World, where he was able to color in a digital coloring book and add the characters of the story to a scene of his own. It was a lot of fun to see what he came up with. The interactive episodes also include some other fun mini games such as a balloon popping game and more. 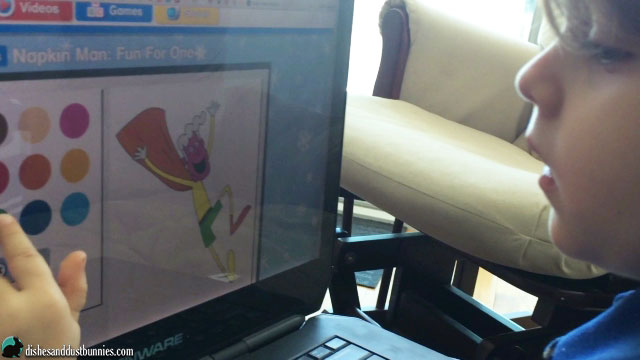 Donnie will be turning 3 years old this March and that means that late next year, he'll be starting his first days of kindergarten. As with any first time mom, this has my nerves and emotions all over the place! I know everyone says this, but seriously… Where did the time go?!

I'm hoping Napkin Man will help give my son a little extra preparation for some of the emotions he'll likely deal with when he starts school. I love how the episodes show the children of the story in a setting that's realistic and relatable for kids my son's age.

The themes and emotions discussed in each episode are something we've all dealt with at some point in our life. I feel that allowing a child to watch and play with the interactive episodes is a great way to help supplement the guidance parents are already giving to children.

Plus, it's fun for them! 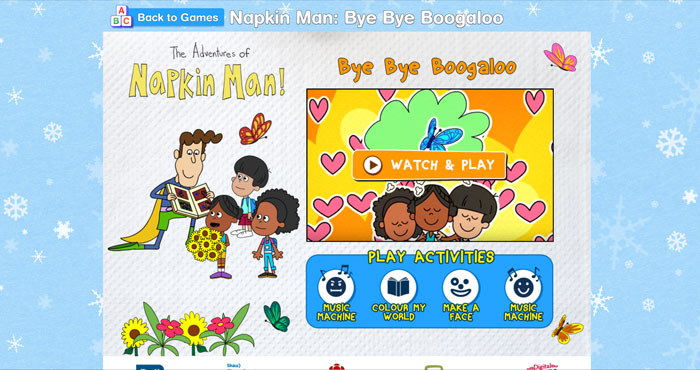 Bad Hair Day – The theme of this episode is about how to cope with feeling embarrassed. I love that the message for this one is that if you're embarrassed about a change to your appearance, remember that what seems unusual to you may not be that unusual to others.

Get Well Soon – In this episode kids learn about empathy. A coping strategy that's taught in this one is that if you're feeling sad because a friend is sad, cheering them up will make you feel better as well.

Fun for One – This episode helps kids learn that when they're feeling lonely or left out, it's ok be alone sometimes. The key message for this one is that there are lot's of fun things to do on your own!

Bye Bye Boogaloo – This episode deals with the loss of the class's pet hamster. Napkin Man shows the children what we can do when someone passes away and how to deal with the tough emotions that come with such situation.

I highly recommend checking out the online interactive episodes of The Adventures of Napkin Man and seeing what your kids think of it!

In celebration of the interactive episodes of The Adventures of Napkin Man, we're giving away One (1) $100 VISA Gift Card!

Entering for a chance to win is simple. Just fill in you name and email using the giveaway box below and follow the instructions.

Don't forget you can also submit bonus entries for more chance to win!

Disclosure: I am part of the Adventures of Napkin Man Online Influencer Campaign and I receive special perks as part of my affiliation with this group. The opinions on this blog are my own. 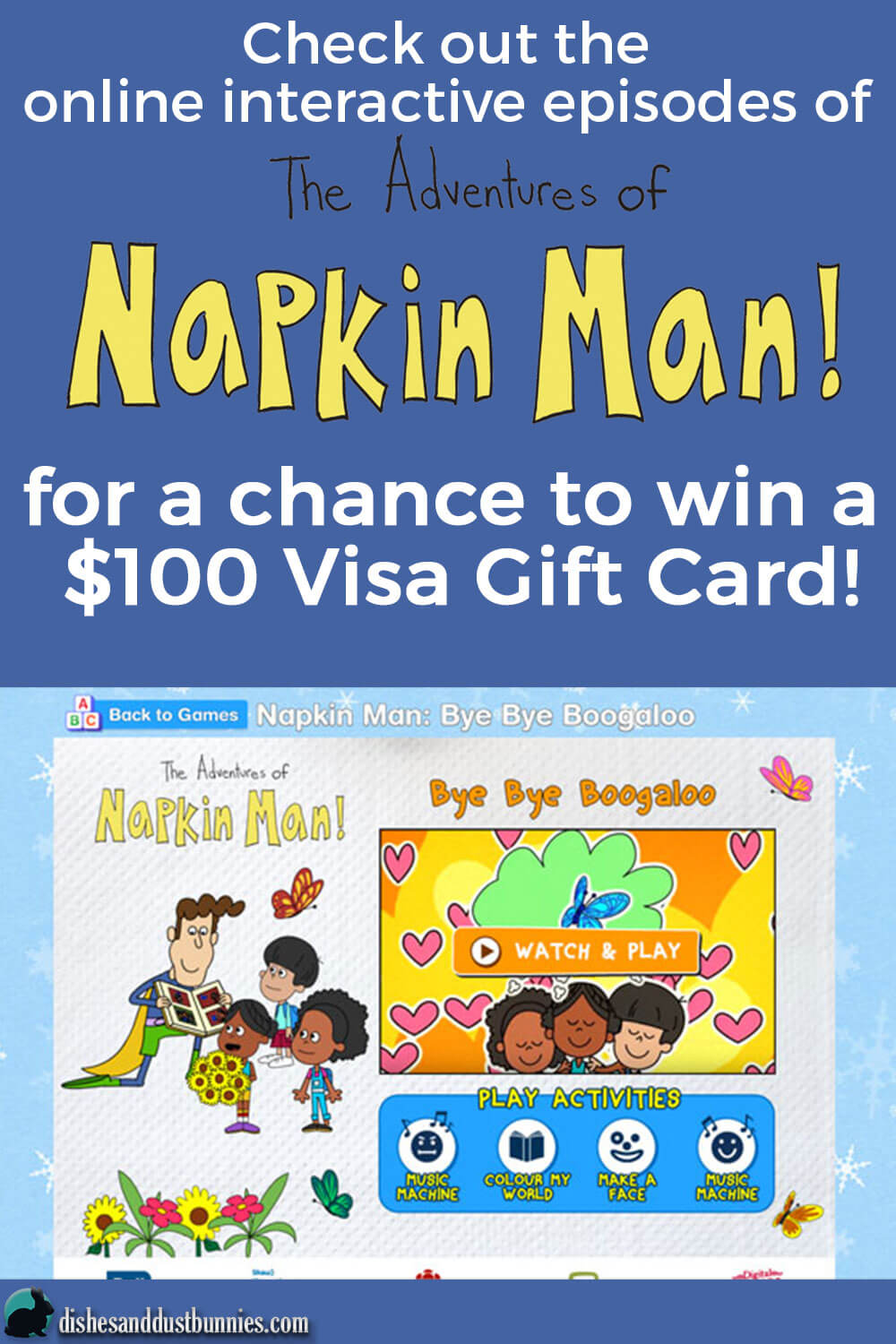