I’ve been a mom for a couple of years now and can most definitely say that life is different.  Priorities have changed and I see things from a whole new perspective. I’m very happy to be a mom and I wouldn’t have it any other way but looking back to my non-parent days there are some things I took for granted. 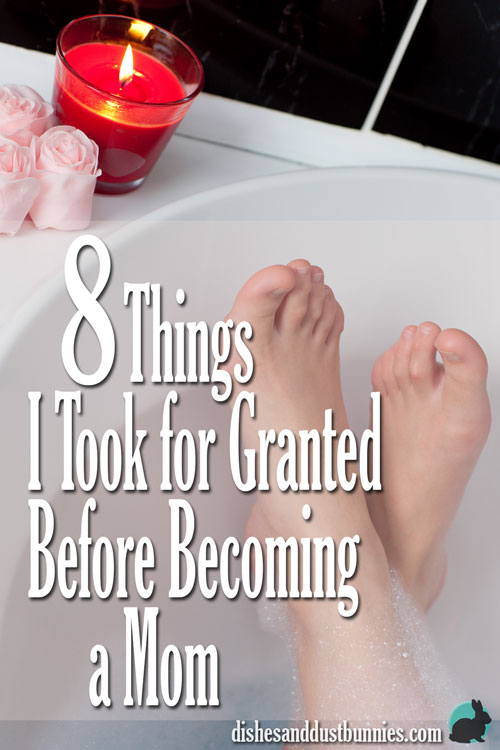 1. Being able to leave the house with only a purse and jacket
I remember a time when it was possible to leave the house with just my purse and jacket and not worry about packing almost a whole suitcase worth of stuff needed for my son.  Maybe I’m being way over prepared but from what I can tell most moms of babies and toddlers seem to end up bringing a whole caravan of items with them wherever they go.

2. Naps
Naps were something I most definitely took for granted before becoming a mom.  If I came home from work and I felt I needed a snooze before supper I would do so without a second thought.  Now if I ever have the chance to nap it’s after I’ve put my husband on duty.  It doesn’t really turn out to be one of those “deep sleep refreshing coma” type naps I used to have – I usually end up just laying there listening to my son yelling “where’s mama?!” in the other room and hear him opening and closing my door repeatedly… that reminds me, I should install sound proof insulation and deadbolts in my bedroom.

3. Letting my house get messy
It’s taken me some time to become someone who’s somewhat of a tidy housekeeper.  I remember being able to procrastinate and let the piles of magazines, note books, and other random stuff pile up until I absolutely HAD to clean up or else I could be featured on the show “Hoarders”.  Maybe it wasn’t quite at that level of messiness, but you know what I mean.  Now with my little guy running around I don’t have the “luxury” of being messy.  If something needs to be picked up and put away I darn well better get it done as soon as possible or I run the risk of having those items confiscated by tiny hands and they will no longer belong to me.  Oh, and there’s also the possibility my son will find something unsavory to taste test from the floor… and I certainly don’t want that to happen.

4. Not having to make elaborate plans if going out
I was never really a party girl before becoming a mom but there were the occasional times when on a whim my husband and I would at the last minute decide to go out dancing.  All I’d have to do was put on my dancing clothes and makeup then be out the door.

Now, if we want to go out together as a couple my husband and I have to plan it out in advance – sometimes by a couple months!  So much more planning now goes into an evening out for us.  In addition to finding a baby sitter there’s all sorts of other things we have to take into account before we go out.

5. Taking as long as I like to get ready
Ever since I was a teenager and learned the fine art slathering on eyeliner, blending intensely colored eye shadows and styling my hair I took whatever time I needed to get everything just right. 30 minute shower? Sure, why not?! I had no concept of time – I took all the time in the world to put my face on. These days, you’ll find me splashing my face with water and wiping some unrecognizable stain off my clothes before running out the door with a screaming toddler to catch the bus.

Oh, you can see my dark under eye circles?  That’s OK, I’m going for the natural raccoon eyes look.  It’s my new style.

6. The sound of silence
By now I probably sound like some cantankerous old lady and I apologize, but now I truly understand why the sound of silence can be a most beautiful thing.  Whether it’s the noise making “beep bops” of toys or listening to the same kids song for the 20th time in a row, you can be sure we have no idea what silence is in this home.

7. Sleeping in
My boss doesn’t let me sleep in.  Wakeup time is whenever my son feels is necessary.  4:38 am it is then!

8. Having the option to deviate from routine without a crisis ensuing!
Before becoming a parent I thought I knew what a routine was.  When you have kids routine takes on a whole new meaning.  I’ve learned that kids need to stick to their schedules or else there’s a big risk of tantrums and crankiness.  Let the kid nap longer and mama will be up all night.  Miss the nap and you have a very hard time ahead of you. Milk in the wrong cup? Don’t even get me started.

Life is a lot different now that I’m a mom but I’m happy with these differences and changes.  Just because my priorities have changed and routines are different doesn’t mean that I’m any less happy.  My life just has a different purpose and meaning now.

Is there something you took for granted before becoming a parent?