Yesterday was an extremely stormy day for Toronto as well as for many other areas here in Canada.  That didn't stop us from making sure our son made it on time for his appointment to see Santa at the mall.

I remember when I was a kid back in rural New Brunswick, Canada my family would take me to see the mall Santa any time that worked for them – maybe sometime after the errands or groceries had been finished.  I would stand in a short line and wait my turn to see Santa, tell him what my wishes were, have my picture taken, receive a candy cane and then be on my way.  The process has become much more involved and high tech since then.

In order for our son to spend a couple minutes with Santa we had to book an appointment online weeks ahead of time.  When I booked there were only a few spots available so we had to take what we could get.  The other malls I looked into were either fully booked or just wouldn't jive with our schedules.

Santa really is getting he VIP treatment these days.  Santa now has a log cabin of his own next to the Toronto Eaton Center.  It's not just a log cabin – it could very well be considered a throne room.  We had to sign in and be escorted to the cabin to see his Merry Highness.  Santa even had a special helper to guard the strollers set aside by the parents.  Everything seemed so lovely.

The whole process is so different from the Santa visits I remember as a child.

Santa read a story to the children as they sat on their little chairs.  My son, Donnie seemingly curious at first soon became more interested in removing the tiny doors off the decorative lanterns in Santa's cabin.  Stopping the child from this destruction was nearly impossible. As Santa calmly read his story to the children I could feel the bubbling of a tantrum coming to the surface as we tried to confiscate the lantern from Donnie.

It's all a blur between the destruction and the taking of the Santa photo.  The tantrum was somehow averted and Donnie was the first to see Santa after the story.  Somehow we managed to get a pretty decent picture!  🙂

Magic happened.  This must truely be the real Santa. 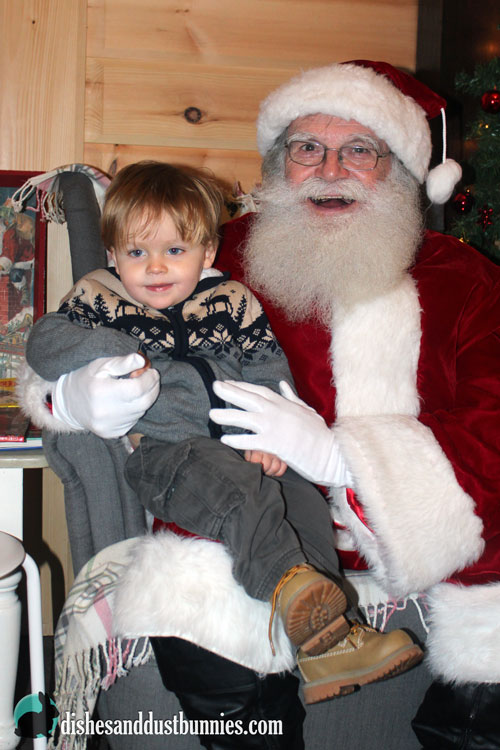