This post may contain affiliate links. This means I may receive a small commission at no cost to you when you make a purchase using my link.

Over the weekend my husband and I had the opportunity to go to The Baby Show here in Toronto at the Direct Energy Center.  I had heard lots of good things about it before but wasn't able to visit last year so I was excited to see what it was all about this time.

There are many booths set up with everything from first aid demonstrations to products, resources and also services that would be of interest to families with little ones.  One of the really awesome parts of the show is that I was able to receive a sample bag with lots of baby and toddler goodies!  As we walked by many of the other exhibitors also handed out samples of items to try out.

It was impressive how the show also had set up various play areas set up for toddlers to burn off energy and there were also convenient little breastfeeding areas and changing stations set up in various parts of the show room.  The changing station was great! There were even various sized diapers provided for use along with samples of diaper rash cream.  So again – more free stuff! I wish I had been able to attend last years show!

The best part of the show was the entertainment on stage for the little ones.  My son's favorite TV show at the moment is “Daniel Tiger's Neighborhood” so we jumped into the opportunity to meet the tiger himself.  Donnie wasn't too sure about this great big tiger person who sort of resembled his favorite character but he seemed to enjoy the music put on by Kids CBC.

At one point during the stage show Patty Sullivan (children's entertainer from Kids CBC) was singing a song about playing soccer and a ball was being bounced around in the audience.  I'm not sure what my husband was thinking when the ball reached him, by reflex he smacked the ball so hard that it was almost whipped at the Patty on stage.  It was great to see the other parents laughing about the situation – luckily Patty was ok.

Donnie had a few little tantrums during the visit to the show but it was quickly quelled when we visited the play areas where he was able to try out various toys and interact with some other little ones.  I'm becoming concerned that this boy may be a ladies man in the future since he was trying to appear quite gentlemanly with the little girls in the play area.  He took great delight in assisting some of the little ladies by opening and closing the doors of a miniature car they were playing with. 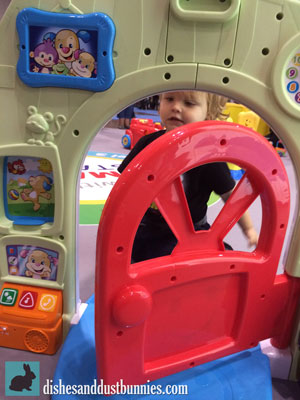 If you're expecting or have young children it's a good idea to plan to visit The Baby Show next time it's in your area.  If you're not in Ontario you should try checking online if there are any similar baby shows in your area.  It's definitely worth visiting, especially for the entertainment and the free samples!